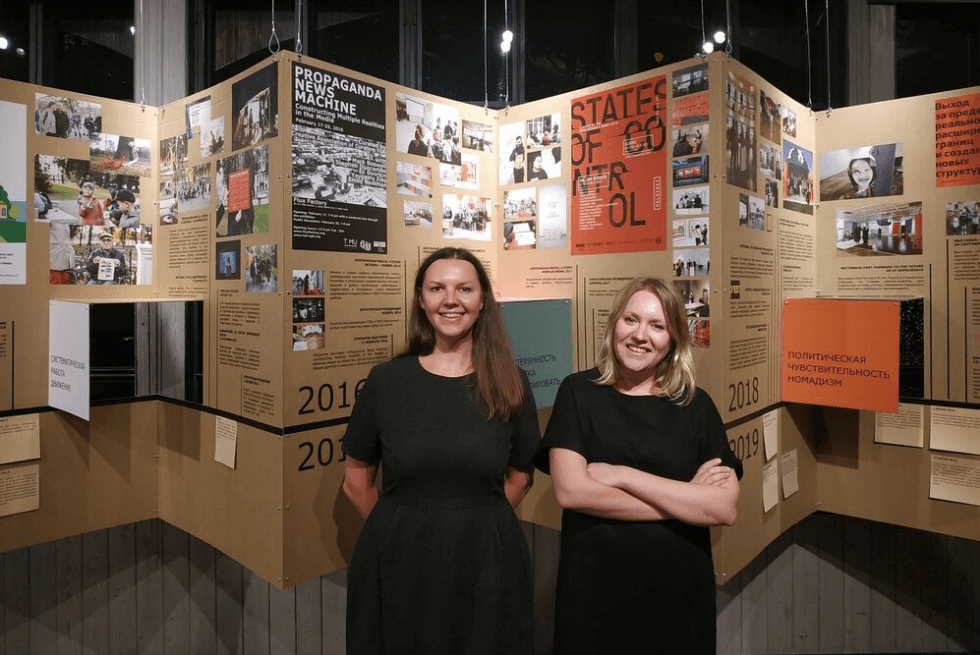 The Creative Association of Curators TOK is a curatorial duo founded in St. Petersburg by Anna Bitkina and Maria Veits in 2010 as a platform for research projects at the intersection of contemporary art, social sciences and socially oriented design.

As a nomadic collective working between Russia and Europe, the Middle East and the United States, TOK curators place their practice between historical analysis and political imagination. Their multilayered, durational and cross-disciplinary projects generate new knowledge about the causes and consequences of changing political realities.

Often working outside of traditional art spaces, TOK infiltrates into social structures, bringing their strains and corrupt functions into the public discourse in order to revisit the roles and powers of social institutions and redraft their potential future. TOK investigates mechanisms of post-Soviet public space and modern cities, collective memory and amnesia, the transformation of social institutions, including education and local governance, media and strategies for managing public opinion. TOK’s activities include exhibitions, performances, educational events (conferences, seminars, summer schools, round tables and discussions), and publications.

TOK curators will join the (Re)configuring Territories residency in the spring 2021.

During their residency, TOK curators would like to critically rethink the parameters for historical analysis of the post-industrial areas in cross-border territories between Russia and Estonia as well as to look at their common political, industrial and ecological history. By conducting cross-disciplinary analysis of the legacy of such city-forming entities as the textile factory, the post-nuclear seaside town Sillamäe and The Baltiс Power Plant, TOK curators plan to publicly address the details related to impact of these industries on the regional natural environment and beyond. They also plan to investigate the connection between the ethnic landscape, urgency of technological development for military purposes and secret geological operations in the area of Narva. The curatorial research will include work with archival documents and historical footage, conducting personal interviews with former workers of the industries, witnesses and victims of industrial processes and secret operations, talking to local biologists, geologists, historians and environmental activists and journalists.
Read More